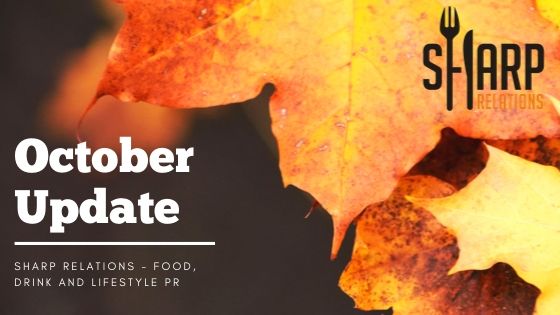 We’re going into half term with a bang!

October has continued on from September at a relentless festive-fuelled pace with client’s samples for gift guides and taste tests firing out in every direction across the London and the UK.

Many of the long lead glossy publications are already looking ahead to January. It’s certainly a good time to have a vegan or vegetarian friendly product range or menu, like our aquafaba-fuelled friends at OGGs® and new client Nim’s, an air-dried whole fruit and vegetable crisp producer – one of your five a day.

You may have spotted our adverts for new staff; we’ve had an overwhelming response with nearly 50 candidates applying for the role of office junior. And we’re hoping to confirm the new recruit by the end of the year, taking our little team up to four people.

PR Toolkit has doubled its members over the last month. The £14.99 a month DIY food and drinks PR service is really appealing to smaller and start-up companies looking to start building a brand reputation.

Supporting the next generation, AJ Sharp will be giving guest lecture at the University of Kent on 29th of October for its third year Marketing and Management students. She will speak for 45 minutes about the ever-changing media landscape and how to tailor content to fit multiple different sectors and outlets.

News from some of our clients:

OGGs® launched its ethical mince pies this month as well as a 2-pack chocolate cupcake in Sainsbury’s; Pearson’s Arms in Whitstable is preparing for an extremely busy half term with early child-friendly service in the restaurant and the new Wednesday night pie and pint for £10 is looking ahead for Christmas; new fine dining client Thackeray’s restaurant in Tunbridge Well has a completely new look and loads of exciting new dishes on the menu; Macknade has launched butchery masterclasses and plans are well in action for the new venue launch in Ashford in November; Lost Sheep Coffee is basking in the glory of some extraordinary sales success following on from its compostable capsules launch earlier this year; and new client Nim’s has launched a range of fruit crisps perfect for children. There are more equally exciting projects and news stories in the pipeline, which we can’t shout about yet, but there will be more on those next month….